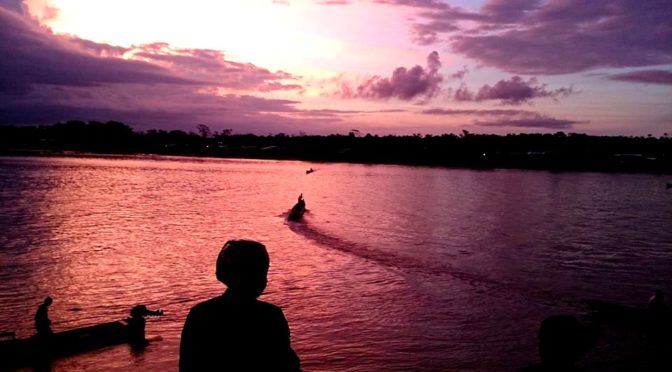 In this blog, I synthesize the cases that have protected the rights of rivers in Colombia, first summarizing the two main constitutional actions used in these cases. I finish with some conclusions.

“Since the promulgation of the Political Constitution of 1991, the protection of the environment occupies a significant place in the Colombian legal system. From this perspective, this Court has recognized the ecological nature of the Constitution, the fundamental spirit of the right to a healthy environment and its connection with the fundamental rights to life and health, among others, which imposes correlated duties on the State and on the inhabitants of the national territory.”[2]

Compared to other legal actions, a “tutela” does not require a lawyer, has much simpler procedures and gets processed expeditiously.

Given the serious pollution caused by mining on the Atrato River in the Colombian Pacific, the ancestral territory of Afro-Colombian and indigenous communities, in 2015 the organization Tierra Digna, representing several Afro-Colombian communities, filed an “acción de tutela” before the Administrative Court of Cundinamarca, which declared it inadmissible. On second instance the Council of State also declared the legal action inadmissible.

Finally, the Constitutional Court reviewed the case and granted the protection through Judgement T-622 of 2016. Among other protections, this judgement ordered: protection of the rights to life, health, water, food security, a healthy environment, culture and territory for the actors; the design and execution of a plan to decontaminate the basins of the Atrato River; an action plan to definitively eradicate illegal mining in the region, and; a socio-ecological evaluation of the impacts of mining.

Specifically, on the rights of nature, the Court ordered: “RECOGNITION of the Atrato River, its basin, and tributaries as an entity subject to rights of protection, conservation, maintenance and restoration by the State and ethnic communities.” As a result, a government representative and community representative were put in charge of the legal representation of the river’s rights, making them “the guardians of the river.”[3]

This popular action was interposed by the local Ombudsman of the central-western province of Tolima, Colombia to protect the collective rights of the inhabitants of these areas in the face of mining.

In June 2019, the Regional Court of the Province of Tolima recognized rights to three rivers: “It establishes the recognition of the Coello, Combeima, and Cocora rivers, their basins, and tributaries as individual entities, subject to rights of protection, conservation, maintenance and restoration by the State and the communities.” This ruling also ordered a mining stoppage in these rivers and also declared the shared responsibility of mining companies for environmental impacts.[4]

Senator Juan Luis Castro and activist Diego David Ochoa filed an “acción de tutela” in response to the serious environmental situation of the Cauca River, one of the most important in Colombia.

In 2019, the Superior Court of Medellín recognized the Cauca River, its basin, and its tributaries as a subject of rights and ordered their protection, conservation, and maintenance by the State and Public Companies of Medellín (EPM in Spanish). EPM is building the largest hydroelectric plant in Colombia on the Cauca River. Similarly, it “recognized that future generations are subject to special protection and, as such, the protection of their fundamental rights to dignity, water, food security, and a healthy environment are granted in their favor.”[5] This case shows that not only is mining a threat to the rivers of Colombia, but also hydroelectric projects causing social and environmental impacts. Currently, the energy grid of Colombia relies mostly on hydro energy.

In Colombia, a judicial precedent for the rights of nature has been consolidated and is likely to be developed further by future decisions both in the highest Courts and local Tribunals. The judgments of the Constitutional Court are especially important in a context where the rest of the world is also advancing in the recognition of the rights of nature, such as is the case with the Vilcabamba River case in Ecuador (2011), the Te Awa Tupua (Whanganui River) law in New Zeeland (2017), and the Ganges and Yamuna Rivers case in India (2017).[6]

In Colombia’s case, there are several challenges in materializing this type of judicial order and guaranteeing these rights, including the implementation of judicial orders for the protection of rivers and other ecosystems subject to rights amidst a complex context of conflicts and weak institutions, the implementation of complex judicial orders that involve the protection of the rights of future generations, and a lack of clarity about which communities and institutions should assume legal representation for the purpose of daily procedural activities in the name of nature.

[2] Constitutional Court of Colombia. Judgment T-341 of 2016. Available in Spanish at this link.

[4] More information about this case in Spanish can be found at this link.

[5] A broader context of the situation and the complete Judgment in Spanish can be consulted at this link.